CHECK IN THE NIGHT BEFORE:

I use a flexible check in system to simplify and add flexibility as well as back ups to the check in process.

Try the following check in methods in order for the best use of the system. Method 2 and 3 are for when I either did not or can not get to a computer to update. Method 1 is the simplest and preferred way, but sometimes I cannot have access to a computer due to a lesson going late or other issues.

1.  CALENDAR: Go to my online calendar between 7 and 8 PM, you should have received the password for this.  If not, skip to step 2.   On the calendar there should be instructions including where to meet and or check in on the following day for your lesson.   Sometimes I cannot get to a computer to update the calendar or you are not near a computer at this time. So, if the calendar has not been updated or you cannot access a computer during this time, go to step 2.

2.  Call Jeff:  at the cell phone 415-310-7411 between  7:00 and 8:00 PM the night before a scheduled lesson day. When you call, you will be briefed on the weather for the day and either be given a time and location to meet, or you will be told to call back to confirm weather at a specific time the next day. Enough time will be provided to allow you to get to the lesson from your location.

Most Tandem Flights are done at or near Mussel Rock  in Pacifica (Unless a special plan is in place for some other venue).  Directions to Mussel Rock

THINGS TO BRING FOR A TANDEM PARAGLIDING FLIGHT:

General Instructions for a Tandem Passenger

You will need to follow the instructions of the Tandem Pilot. Do not grab any of the lines or webbing above your head unless the Pilot is guiding you in flight lessons. Make sure you are clear on the instructions for how to transition from the launch position to the flying position and visa versa for landing.

How a Paraglider Launches and Lands:

A Paraglider is a parafoil wing. It launches similar to how a kite is launched. In light winds, Pilots normally do a “Forward Launch”, and in strong winds, pilots do a “Reverse Launch”. In either launch technique, the pilot and passenger accelerate together to reach a good flying speed for take off. 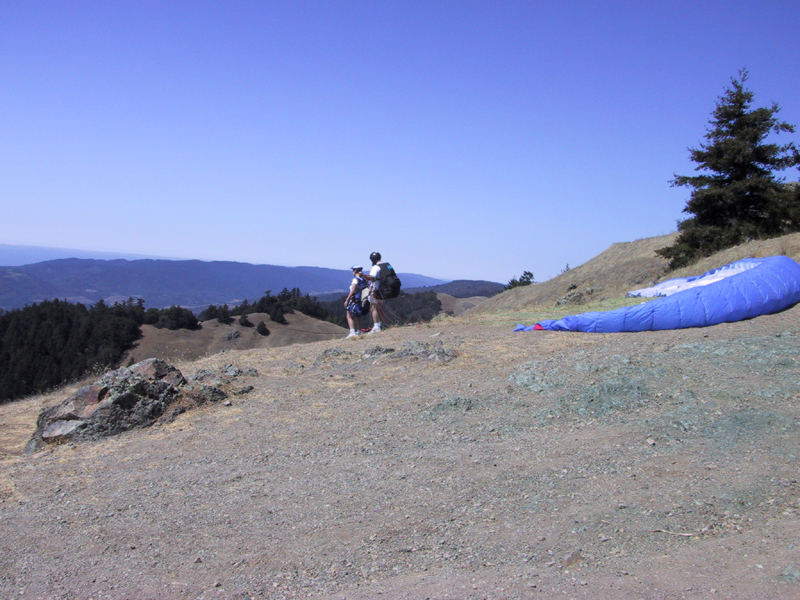 After going through a safety checklist, we are ready to go. In a forward launch like this, the wing slows the run down as it first comes up . Both the pilot and tandem passenger continue to accelerate down the hill together. I find that with a 5 mph breeze, at most we take about 4 to 6 strides to reach flying speed. Leaving the ground is never assumed, both the pilot and passenger need to run until well clear of the ground.

Forward launches are preferred in very light or no wind conditions.  This means that this for m of launch is mainly for Mountain launches as we need wind for coatal soaring.   The Pilot and Passenger are lined up under the wing both facing forward. The Paraglider wing is layed out behind in a horeshoe shape. When the wind is right and the Tandem Pilot decides to take off, both the Pilot and Passenger must run forward together. At first, as the wing climbs overhead, the wing will not allow much forward progress. But, as the wing gets fully overhead, the Pilot and Passenger will be able to accelerate together down the hill. They must run efficiently together until the glider is well clear of the ground. Somtimes the wind can gust abit during the run and then die slightly. This is why it is important to keep running until well clear of the ground.

When there is wind above about 3 MPH, reverse launches are generally preferred. This is always the case for Cliff / Ridge Soaring flights. In a reverse launch, the pilot will turn to face the wing, but the passenger will be facing the cliff or launch point. The reason the pilot faces the wing is to have more leverage for pulling the wing overhead. When the pull-up begins, the passenger will try to aid the pilot in pulling the wing up, by bending their waist, leaning forward and using their legs to drive forward. If the wind is stronger, as the wing comes up, both the Pilot and Passenger may get pulled a few steps backward. Both are trying to resist this and maintain their position. Once the wing is overhead, the backwards pull will stop. The Pilot will then rotate back to facing forward. The passenger can now slip their arms under the tandem spreader bars (I show people how this works at the site). Both the Pilot and Passenger can proceed to run off of the Launch. With the wing above and helping support us,  running is not difficult and the take off will normally occur at a fast trot as the cliff is reached. It is important to keep the legs moving and ready to move until at least 10 feet above the ground.

To do:  There are two main things to do after getting in the air.   The first is to tuck your arms underneath the spreder bar that will be just behind your elbow.  This will allow you to lean back more comfortably in your harness.   Also, sometimes you will need to get fully seated in the harness.   Often this will take care of itself, however, sometimes the seat board part of the harness will not be under your thighs enough.  If this is the case, grab the webbing on the harness near the thighs and while pulling your kness up, wiggle and pull the harness further under your thighs.

Not to do:  Do not grab any of the glider webbing above your shoulders unless you are being instructed to by the Tandem Instructor.  Once clear of terrain, if you wish, the instructor can have you fly the glider some.  At first this will be with guidance, then by yourself.

Turns:   Tandem gliders are big craft and it is helpful if the passenger helps with weight shift during turns.   Leaning right or left with the hips is the goal.   By adding weight to the direction of the turn, the glider will be more responsive.   Rolling the hips is as simple as unweighting the other side and does not require the shoulder to lean.   At first, for example to lean right, lift your left thigh above the right and you will feel the right side of your butt take the weight.   At the end of each turn, simply remove the weight shift.

Rarely a passenger might get a little airsick.   Please let the tandem pilot know if you feel at all queasy.  Coastal flying normally does not cause such, but if you do feel any signs the pilot can minimize turns and maneuvers to help you enjoy the flight more.

Prior to landings, the passenger must drop back into their leg straps.. This is the oposite of pulling the bottom of the harness under the seat. It is accomplished by simply straightening the legs and torso to a vertical position. This is necessary because in the normal seated position, running and landing are not going to work. I will remind them to drop into the leg straps during the landing approach

A Paraglider will land into the wind. The pilot will pull the Brakes down on the glider to slow the descent and forward speed as much as needed just above the ground. In light winds, running is sometimes necessary. In stronger winds, landing rarely require running, but on every landing the Pilot and Passenger need to be prepared to run.

How speed and steering is controlled in a Paraglider:

Both speed and steering of a Paraglider is controlled mainly through the brake lines. Brake lines are lines that go up from the control (aka. brake) handles and cascade up to the back edge of the wing. By pulling the brakes down, the speed of the Paraglider is reduced. If one brake is pulled down and the other is left up, the Paraglider will turn in the direction of the brake pulled down. Steering can be further enhanced by leaning the body in combination with use of the brakes. When you go tandem, you should not grab or pull on any of the risers or lines.

Paraglider pilots have reserve parachutes usually attached at the rear of the harness. A reserve chute is used only if there is some form of failure that would make the Paraglider unflyable. A reserve chute is designed to save a pilot, or in a Tandem, the pilot and passenger’s lives. The reserve parachute is normally mounted on the side of the pilot’s harness near the hip. The reserve is deployed via a strong throw from the pilot. FYI, I have never had to deploy a reserve parachute ever in single or tandem flight. If the reserve was deployed in a Tandem Paraglider, both the pilot and passenger would descent together. With some systems, the passenger would hang from the pilot, in other systems, both would be supported below both or one of the spreader bars.

Paragliding, Glider Certification and the FAA:

The FAA does not normally allow dual place flying for crafts such as Hang Gliders and Paraglider. However, the FAA has granted the United States Hang Gliding an exemption from this. Under this exemption, USHPA self regulates Tandem flights. Part of this exemption is that the FAA does not certify the airworthiness of Paragliders. Gliders are certified by the Hang Glider Manufacturers Association HGMA, ACPULS, DHV or SHV. Most of these are European based bodies that have a series of tests for glider certification.